Morelock-Ross is Built to Last

David and Andy Ross are building themselves up to take over their father’s company, Morelock-Ross. 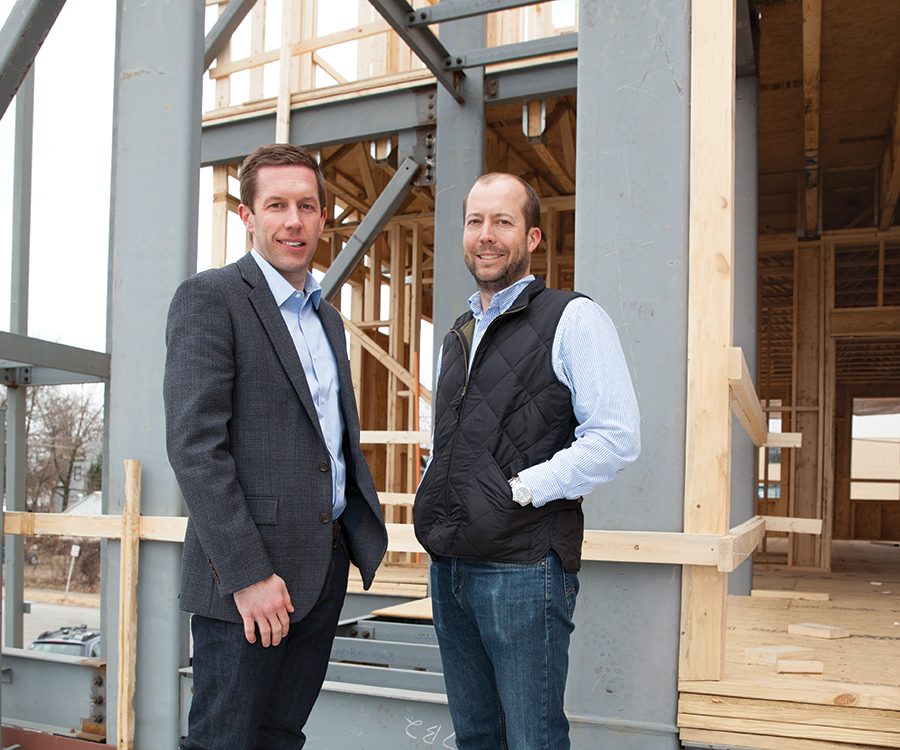 David and Andy Ross are building themselves up to take over their father's company, Morelock-Ross.

Brothers David and Andy Ross had no intention of working for their father’s business as soon as they did, but they both found their way through the doors of Morelock-Ross early in their careers. Today, David has been there for 13 years and Andy for seven, and the two are preparing to take over. Wayne Morelock and Kenny Ross, David and Andy’s father, founded the building company in 1982 and are still actively overseeing it today. The company does residential building, commercial building and property management. Kenny Ross has spent the last decade teaching his sons and handing over some responsibilities.

We’re taking small steps to be more efficient and as cutting edge as we can be.” —David Ross, Co-owner of Morelock-Ross

David came on in 2003 after graduating college. “Everything was busy and booming, and we were building 200 houses a year,” he says. He started out in the field and worked his way up to shadowing superintendents before starting project managing in 2005. Now he handles administrative information, day-to-day tasks, estimating and commercial construction. Andy followed a similar path, joining in 2009 and learning out in the field. Now he handles project management, helps with estimating and oversees all the business with STAR Building Systems, a franchise started early in the company.

David and Andy have learned how to balance being siblings and work partners. Andy says the roles are simple. “Because he’s the old brother he’s been here longer, so it’s a clear hierarchy,” Andy says. “He’s technically my boss, but we speak about a lot of things as equals. I come to him for advice and gain from his experience. I trust him.” Because Andy started later, he saw a different stage of the company’s life at first. David joined because they were busy and needed manpower, but Andy came in right at the end of the recession. “I didn’t get to see the good before the bad hit,” he says. Both brothers learned a lesson in perseverance, and that experience still affects the way the business is run today. “You take a considerably more conservative approach at how you look at what kinds of jobs you go after and the types of risks you take,” David says.

The two have found themselves in a transition period for the company. “It’s different for us because when [Wayne and Kenny] started, they were entrepreneurs,” David says. “We’re transitioning to be more structured. We’re not corporate by any stretch of the imagination, but we’re being more strategic because we have over 50 employees. There are different aspects and market conditions we have to be aware of. We’re trying to plan ahead from a different perspective from what they had 15 to 20 years ago.” While the brothers say they take a conservative approach in some areas, they aren’t behind the times. “We’re taking small steps to be more efficient and as cutting edge as we can be,” David says. The employees work on iPads, and owners, project managers and estimators have discussions about new software and improvements in weekly meetings. They ask the question, “What can we do to get better?”

Even with a generational gap, David says different opinions are not a concern. The brothers are spending this time learning as much as possible. “Every day is completely different for us,” David says. “Every project is different. The more time we can spend learning from people who have been doing it longer than us, the better off we’ll be when that time comes.”

Andy says it’s important to want to be a part of the business. “The thing about Kenny was he never forced us into this,” he says. “We both became part of the company by choice.” Having a close-knit relationship certainly helps the Rosses. “There’s something special about being able to spend as much time as we do together and with our dad,” David says. “I don’t think there’s anything you can put in front of us that could replace that.” Spending all that time together inevitably creates different relationship dynamics at work and home. David says it is hard to shut off the business mind and not talk about work at the family dinner table. But to have a release, the brothers practice yoga and hit the golf course with their dad. Sometimes, mixing work and home isn’t all bad, though. “When you get a good project, we can celebrate together at family dinner,” Andy says.