Men’s Suit Mart has undergone changes over recent years, including a move to Brentwood from downtown. Store founder Sandy White passed ownership to his son, Ben White, who’s combining his dad’s management style with his own way of running a business. 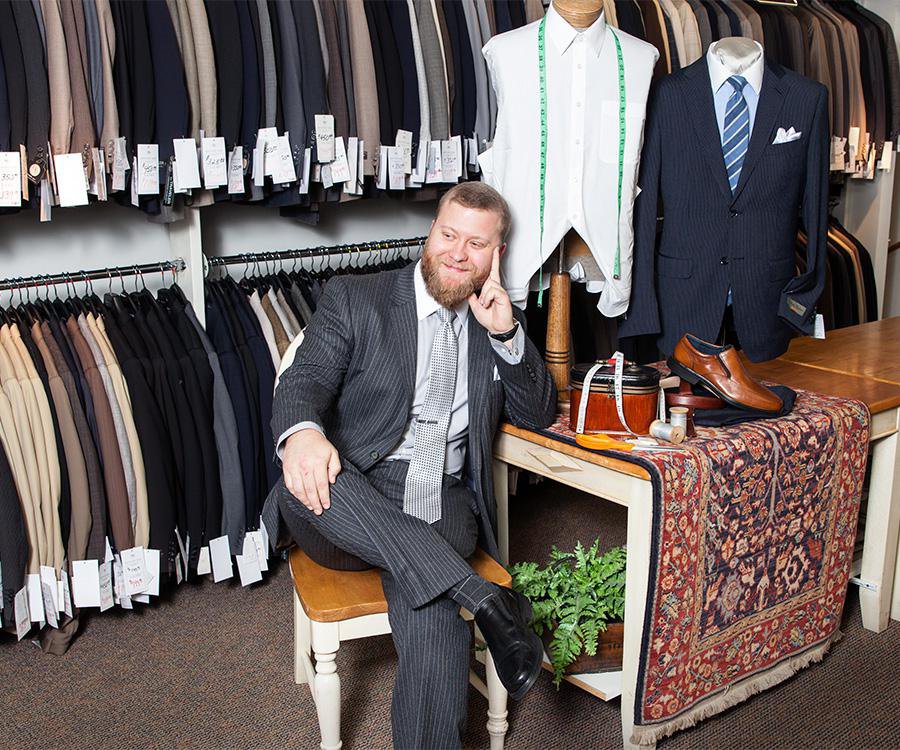 Some of Ben White’s first memories are of hanging out in the suit shop his father, Sandy White, owned. He’d try on a coat and then run to the mirror, dragging the floppy arms beside him. Looking in the mirror today, White sees a different reflection. His coat is fitted perfectly, and he’s not just playing dress up. He’s the owner of the family-run haberdashery called Men’s Suit Mart.

Since opening in 1991, Men’s Suit Mart has offered upscale merchandise at reasonable prices to Springfield’s best dressed, distinguishing itself in the retail market by offering exceptional customer service and attention to detail. Growing up, these tenets became apparent to White as trips to the shop in his free time turned into teachable moments. “At this point, I was a little more interested in how everything worked and was run,” he says.

1. Ben White focuses on holding the quality of clothing he offers to the same standard his father did, even down to fun, printed ties.
2. Most of White’s childhood was spent inside the walls of the store, where he learned everything from mannequin styling to payroll.
3. The store now offers on-site custom tailoring, so customers can find the right jacket and make sure it’s the perfect fit, all in one trip.

In 2012, White started punching the clock as an employee and shadowing his dad, watching how he styled mannequins, adjusted the payroll, even locked up after a hard day’s work, knowing the business would one day belong to him. This gradual preparation alleviated the fears some up-and-comers have of messing up what their predecessors worked so hard to establish. Even when the moment came for White’s dad to officially hand over the keys, White didn’t have any doubts.

“I was lucky to have my dad as my mentor and my boss,” he says. “It’s easy to learn from someone you respect. My dad has a way of presenting things very calmly and logically. We both understand each other in a way that, I would say, only a father and a son can. We both have a knack for this and truly enjoy it, which makes the experience of becoming the business owner exciting.”

“It’s that attention to detail and speedy service that keeps a small little independent [shop] like us rolling.” —Ben White, owner of Men’s Suit Mart

As the new owner, White is following his dad’s advice and keeping honesty and integrity at the core of his business strategy. He’s also continuing his dad’s legacy of offering traditional business attire with a timeless fit and modern flair, but he’s putting his own spin on things by stocking the store with current fashion trends. In addition to suits, sport coats and slacks, Men’s Suit Mart now carries business-casual essentials, like button-up shirts, sweaters and khakis to cater to a broader crowd. Purchasing quality clothing for the store but value pricing it for the customer is one way White is drawing upon more of his dad’s wisdom. “Do things correct the first time around,” he says.

White is also using his keen eye for fit to promote an on-site tailoring service through which minor alterations typically can be completed within an hour. Not having to pay a middleman means the store can keep costs lower. “Plus, we can try everything on you and make sure it’s correct,” White says. “If there’s something that needs to be tweaked, we can do it right away. It’s that attention to detail and speedy service that keeps a small little independent [shop] like us rolling.”

To others who find themselves being groomed as next gen-ers, White’s suggestions are simple: Ask questions about unfamiliar concepts, study your predecessors and take your time adjusting to your new role. “This is a process, and a slow one at that,” he says. “Even though you may not agree with everything, it’s important to remember that there is a reason things are done a certain way. Trying to learn why they do things in that certain way will be a challenge, but it is equally as important. In my situation, my dad has 47 years of experience in the retail industry, and 24 of those are as a store owner and operator. With that came experience and knowledge a person can only acquire with time.”

Though he hasn’t encountered any hiccups due to his dad’s leadership, he admits the time may come when he opens a second store, and that’s when he’ll need guidance most. “As a new generation, I will face new issues and will learn that way, as well, but as long as I keep asking questions and listening to my dad’s advice, I will hopefully be a step ahead of most situations.”