Five takeaways from this morning’s panel of four local companies that participated in The Great Game for Small Business, plus exciting news from The Great Game of Business. 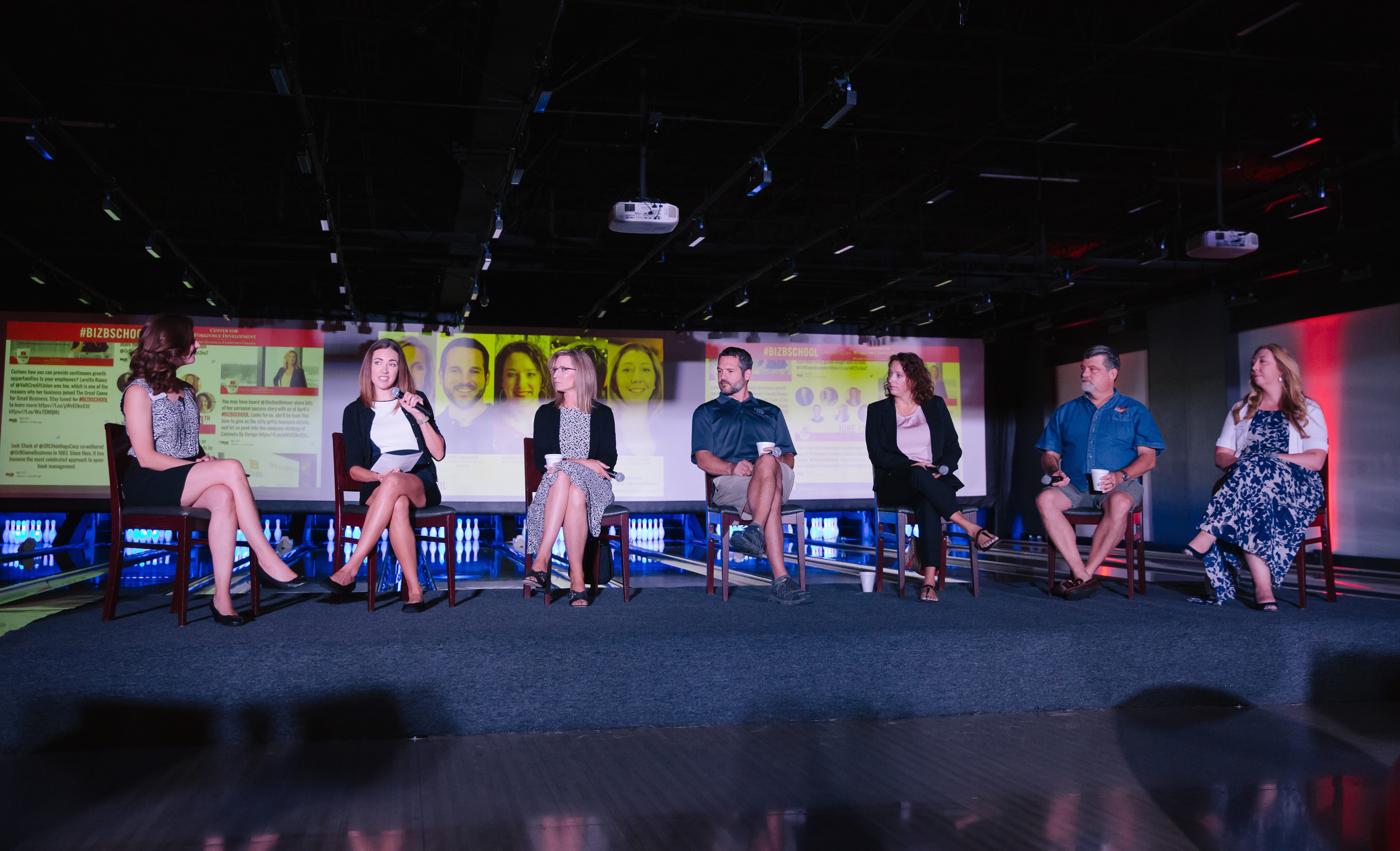 Our latest installment of B-School Breakfast Series was packed with lessons learned and “ah-ha” moments from four local companies that were the first to implement The Great Game for Small Business. We listened to executives from Cabinet Concepts by Design, Volt Credit Union, Mother’s Brewing Companyand Penn Enterprises, Inc. share their experiences of playing The Game, and what they learned along the way.

We partnered with The Great Game of Business to create The Great Game for Small Business, a program giving local small businesses an exclusive opportunity to increase worker satisfaction while increasing revenue and profit growth by playing a MiniGame over the course of 16 weeks. The game requires cooperation among all staff members, and directors and managers must be open to sharing the financials with everyone in the company in a transparent and honest manner. 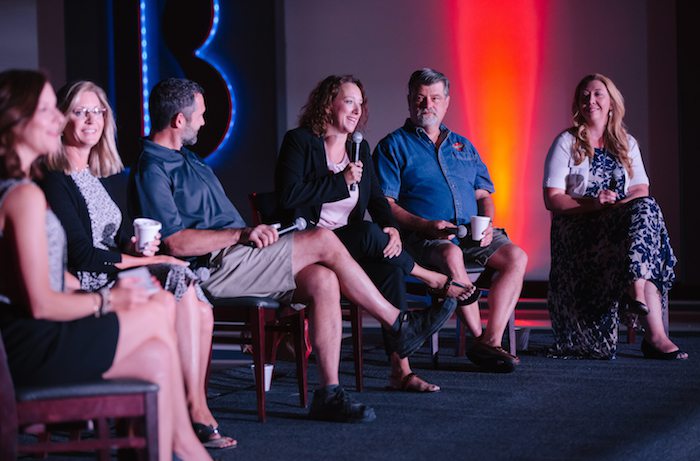 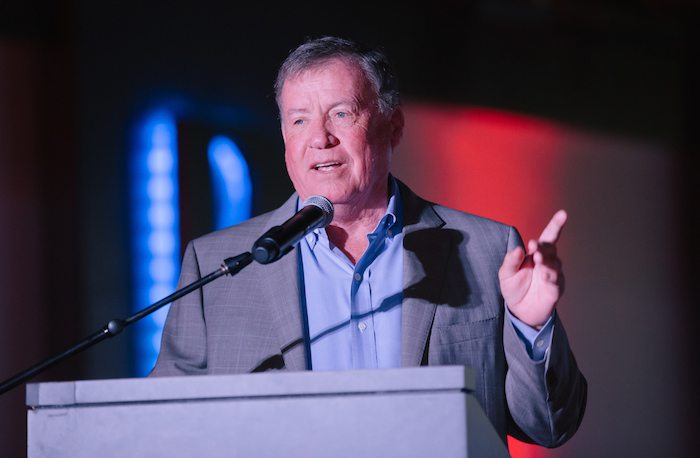 Jack Stack from SRC explains that most wins come as a result from your failures.

When Alesha Gonzales from Penn Enterprises, Inc. first introduced The Great Game of Small Business to her employees, one staff member wanted no part in its implementation. Loretta Roney, from Volt Credit Union, was in the same position and said some of her tellers were doubtful they could impact the big picture.

Every manager, executive and employee must buy in to the process. When they dedicate themselves to learning about the company’s financial statements, they begin asking questions about where the money is going. When that happens, there is a universal understanding, and everyone begins thinking of how they can contribute to the company’s Critical Number™.

As Gonzales continued to lead her team through the 16-week process, her doubtful employee began to realize The Game’s impact on the company. She described how that staff member now tells other locations about the program and its benefit to their Rolla location. During their financial literacy courses, Roney witnessed her staff comprehending what the company’s statements meant and how their actions could contribute to the business.

As Jack Stack points out, “most wins come from a result of your failures.” Not all of the MiniGame launches were successful, and all of them had hiccups during their 16-week course. Shelley and Matt Wehner from Cabinet Concepts by Design struggled to rally their staff for weekly huddles. Jeff Schrag from Mother’s Brewing Company said his business had just adopted a new accounting system before playing. But that’s not to say these companies weren’t successful. The Wehners decided that they would budget their time differently to alleviate the stress of holding huddles during the workday. They learned from their mistakes, which will produce better results in the future.

3. Learn from your mistakes.

The point of a MiniGame is to change a behavior that leads to engaged employees and overall increased profits. However, if a MiniGame fails, coach Katie Davis says that's okay, and that the experience can provide takeaways for next time.

This situation happened to a few of the panelists, including Gonzales. Just as her team was launching their MiniGame, they received a work order that required the company to undergo a large hiring process. Because of the increase, they weren’t producing the results they were originally working toward. With the help of coach Katie Davis, the design team changed the rules and began working toward a new goal.

4. Sharing the financials gets people involved.

Matt Wehner said the largest behavior change he’s seen since playing is the increase in questions his employees ask about Cabinet Concepts’ financial statements. Now that they understand where the money is going, and how they can make an impact, they can produce solutions to problems that formerly fell on the Wehners’ shoulders. Schrag agreed, and said his employees are taking the initiative to learn about Mother’s financials and how they can get information that was previously unknown.

5. It will never be the right time to implement The Game.

Jack Stack pointed out that in business, new situations constantly arise which might throw a wrench in your plans. Penn received a large order, Mother’s implemented a new accounting system, Volt was wrapping up construction project and Cabinet Concepts was still collecting data. Yet each of them decided to implement The Game. It wasn’t easy, and it certainly wasn’t convenient, but they knew what potential gains their companies could reap and reward their employees could see. They just had to take the first step.

Look to the Future

Founded by Springfieldian Jack Stack, The Great Game of Business is rooted firmly in 417-land, but the program and management style is used both nationally and internationally, earning recognition from major publications including Inc., Fortune, Business Week, Forbes and the Wall Street Journal. Companies and executives from all over the world come to our corner of Missouri to learn about open-book management. The Great Game of Business’s momentum continued with some exciting updates for this morning’s crowd.

The first is a discount made available to audience members for two remaining 2019 “Get in the Game” workshops. This two-day workshop shows organizations how they can adopt and play The Game, giving participants an in-depth view of open-book management, an understanding of how and why it works, and a peek behind the scenes at SRC, the local “living laboratory” and birthplace of open-book management. Participants will learn the 10-step Great Game implementation process, participate in a Q&A with local practitioners and take part in a live forward-forecasting Huddle.

The second update was the announcement of a new local Great Game coach. CEO of People Centric Consulting Group, Don Harkey added the title of coach to his resume, joining the local coaching ranks of Alia Stowers and Katie Davis. Coaches work with companies interested in implementing The Great Game of Business, providing not only the framework, tools and training necessary, but also advice, insights and lessons learned from more than 30 years of implementation support for companies of all sizes and in all industries. Perhaps the most important benefit of working with a coach is the accountability and encouragement they provide in the process.

Local businesses interested in participating in The Great Game of Business can contact Harkey at 417-887-6760 or donharkey@peopleccg.com.

Experience The Gathering of the Games

This fall marks the 27th year for the annual “Gathering of the Games”, an annual conference hosting more than 700 Great Game practitioners from all over the world sharing the best practices and lessons learned in their implementation of The Great Game of Business.

“Because Gathering participants are 'open-book' by nature, the level of sharing and networking is amazing,” explains Marketing and Conference Manager Kristi Stringer. “The atmosphere is extremely inspiring for anyone looking to take their business to the next level.”

Take advantage of the experience in September at the Hilton Anatole Dallas. 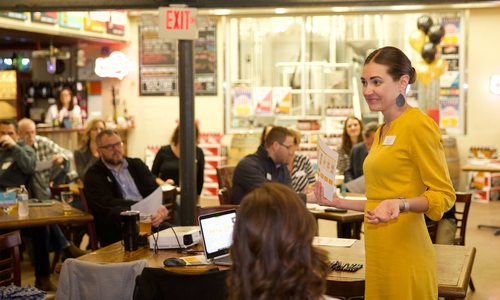 Biz 417 has partnered with The Great Game of Business to create a pilot program for local businesses looking to increase profitability,... 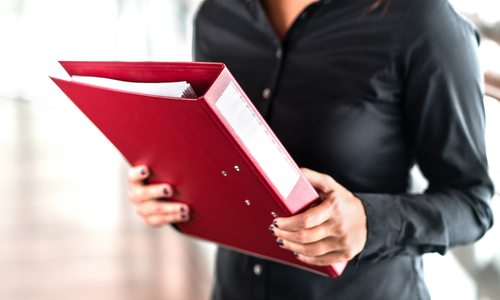 Debbie Tuck joined the Volt team in August. Since then, Tuck has overhauled processes at both Springfield branches. 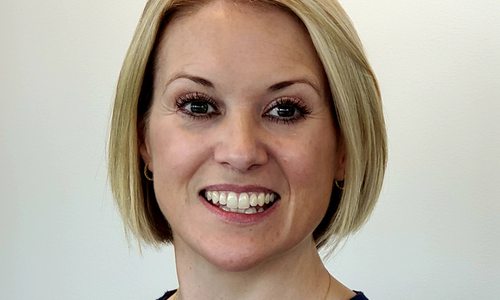 Caroline Richardson Wants You To Slow Down