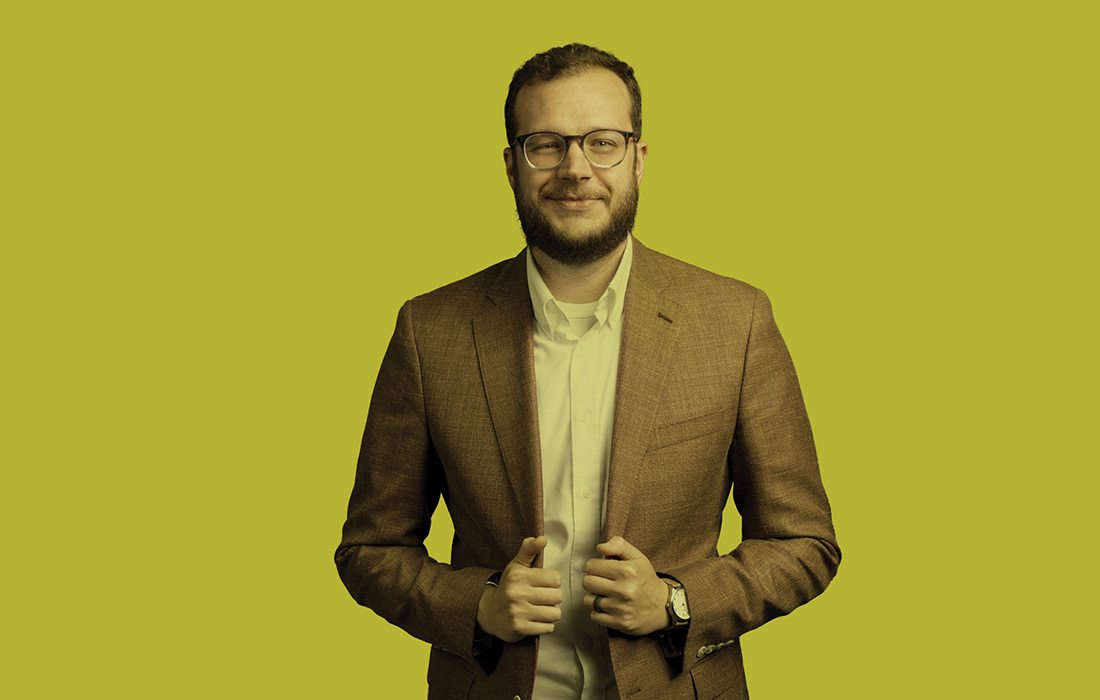 417-land Favorites
Meaningful Mentor: “My wife, Brandy,” he says. “We brainstorm a lot together. After her, it’s my trainer and my therapist.”
Top Event: “Moon City Con,” he says. “It’s a board game convention held annually here in Springfield.”
Instant Boost: Farmers Gastropub.

Anyone who has met Spencer Harris knows his innate ability for conversation. Regardless of the topic at hand, he always has an impactful question or thoughtful response. Harris has a way with words that simply puts people at ease—his words and thoughts flow naturally.

This talent comes in handy when Harris is working with his clients at Mostly Serious—a full-service digital agency that produces custom web design, digital marketing, advertising, SEO and web content—and when he’s leading conversations at Habitat Communication & Culture, the consulting company he and co-founder Jarad Johnson began in 2020 to help companies with strategic planning, performance management, leadership development and data collection. But as he looks to the future, Harris is hopeful that he can also use his communication skills in an even bigger way; he wants to use them for the betterment of 417-land.

“As companies around the world have begun to go more and more remote, people who live in 417-land have the ability to work for companies that are not in 417-land,” Harris says. “Well, one of the things that we talk about a lot as a value of this community is cost of living—it’s cheap to live here. But that perception also influences how much money people are willing to pay for the goods and services that our regional workers produce.”

Harris goes on to explain how local companies often pay less to employees due to the region’s low cost of living. “To prevent 417-land from becoming a community where people live here but work elsewhere, we have to start talking about the value of our work being equal to the value of work offered in other communities,” Harris says. “We have to start raising wages to be competitive with other areas. If we don’t, we’re going to have a lot of people who are living here and making a lot of money working for companies elsewhere. We’ll lose our own workforce, all while they continue to live in this area.”

Harris approaches this challenge fundamentally, as it’s not just about “giving people more money,” he says. “We need to shift the mindset so individuals understand that our work is as good as—if not better than—work produced in other communities around the country and should be priced and compensated accordingly.”