Hometown: Springfield   |   Twitter: @Rob_Blevins_
Take Note: Blevins developed the idea for Springfield Prom, which was first held in 2014 and is now hosted by the Sertoma Club and the Abou Ben Adhem Shriners. This April, an estimated 1,000 people hit the dance floor and collectively gave around $30,000. 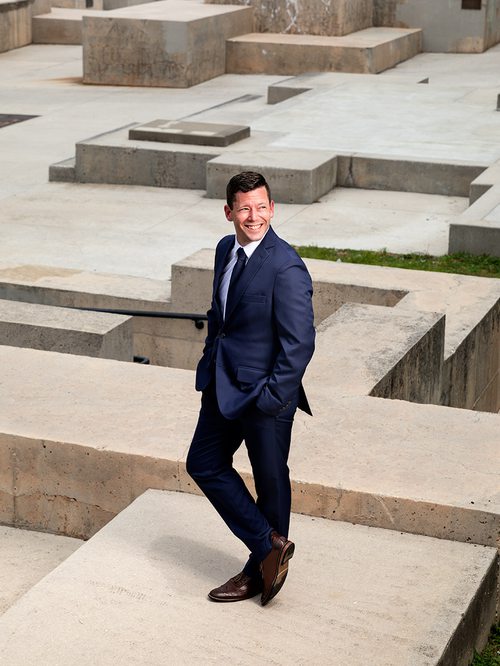 Rob Blevins, 33, grew up alongside seven siblings in generational poverty and wasn’t expected to go to college. The self-proclaimed science nerd could have taken a very different life path were it not for his older brother Scott. That’s why Blevins is determined to help kids thrive as an active Springfield Sertoma Club member, former employee for Big Brothers Big Sisters of the Ozarks and now as a visionary leader at the Discovery Center.

“I remember when [Springfield Business Journal] wrote an article basically saying the Discovery Center was closing down—that’s how it read to me anyway. It was a bunch of really bad financial numbers. At the time, I had volunteered to serve on the board. I really wanted to help them raise money and get out of debt, but I was told that my employment was against the conflict of interest policy.

“I came in [as executive director later], and first, I just wanted to figure out what was going on. The organization was without an executive director for months. They have been losing money for years. So my first goal was to make sure we all had paychecks, to make sure I didn’t lose staff. I immediately did some promotions, reorganized the leadership team structure a little bit. [I] looked at the strategic plan and simplified it to three things: to share our story in the community and make it a story worth sharing, increase or create top-line growth while looking at bottom-line reductions to stabilize the financials, then the third piece is to deliver our services to underserved communities, so senior citizens, girls and women in STEM, low-income [people], preschool kids and rural communities.

“General admission and memberships have been on the decline for I don’t know how many years. In the past three years, they’ve been averaging about 20 percent decline. To me [that’s] the canary in the mine—if people aren’t willing to invest in a yearlong membership, your canary’s dead. But we’re seeing double digit growth in those areas right now.”

Big Picture: “I want to see that every kid [has] had the opportunity to get the educational, inspirational resources they need to fulfill the jobs of the future and attract high-paying jobs to Springfield. My dream would be to have a full-blown STEM elementary school attached to the Discovery Center.”