Hometown: Neosho   |   Twitter: @MissOxendine
Take Note: In 2013, this Missouri State Bear received the prestigious Citizen Scholar Award, which is given annually to six students who are recognized for their academic, community and leadership efforts. 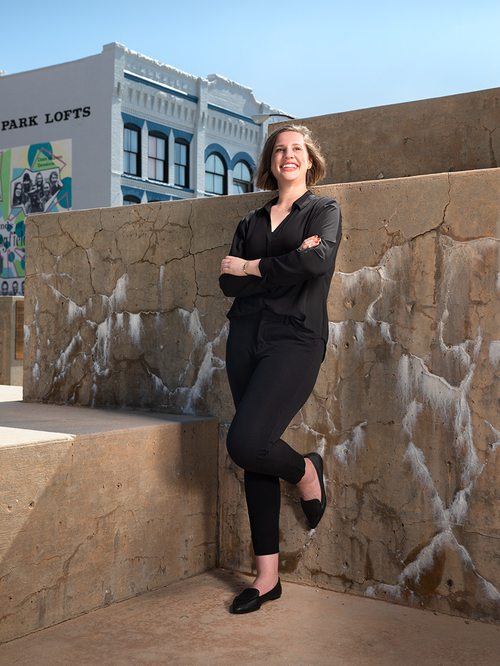 Paige Oxendine moved to Springfield 10 years ago as a college student and thought she’d pursue a career in politics. Instead, she landed in the world of business assistance, which she sees as a way to sustain the city’s future.

“Safe is boring,” Paige Oxendine says. That’s an attitude the 28-year-old has developed in the past couple of years while supporting startups and entrepreneurs who take risks in the name of creating their dreams. Oxendine doesn’t take her role lightly, nor does she believe the impact of her work as the efactory’s program coordinator is limited to clients. “For me, it’s about being involved in community-centric, mission-driven work that really brings value to everyone,” she says. “While we might do something here in the building that provides a specific value to one individual client and their business, the broader value is really for our entire community.”

That’s the common thread Oxendine sees throughout her career and civic involvement. At the Springfield Area Chamber of Commerce, she was the first full-time coordinator for The Network and established the Day at the Capital, an annual event that encourages young professionals to interact with lawmakers in Jefferson City. She co-founded Rosie, a women’s advocacy network that largely works behind the scenes to elevate women to leadership roles on public and private boards, as well as within the workplace. And at the efactory, she plans events, handles community outreach and acts as the point person for the 45-plus companies and co-working clients based at the business incubator. On a large scale, these efforts nurture the creation of a vibrant city.

“I think our community and our region as a whole has a ton of momentum and a ton of assets and advantages,” Oxendine says. Capitalizing on that, she believes, takes courage and persuasive skill to get buy-in from stakeholders. “I think it requires bold, visionary leadership, and I think it requires a certain appetite for risk that I don’t know our community always had, but I’m hopeful.”

Big Picture: Oxendine looks forward to seeing the renderings for the IDEA Commons expansion project come to life. Meanwhile, she’s hard at work growing the efactory’s footprint through the addition of eight offices, a conference room and even more space dedicated to training and programming.