Get to Know Dr. Mike Rakes

Dr. Mike Rakes is a self-professed learner at heart, a student who never saw himself working in higher education. Now, Evangel’s fifth president is proud to oversee future generations of compassionate and thoughtful leaders. 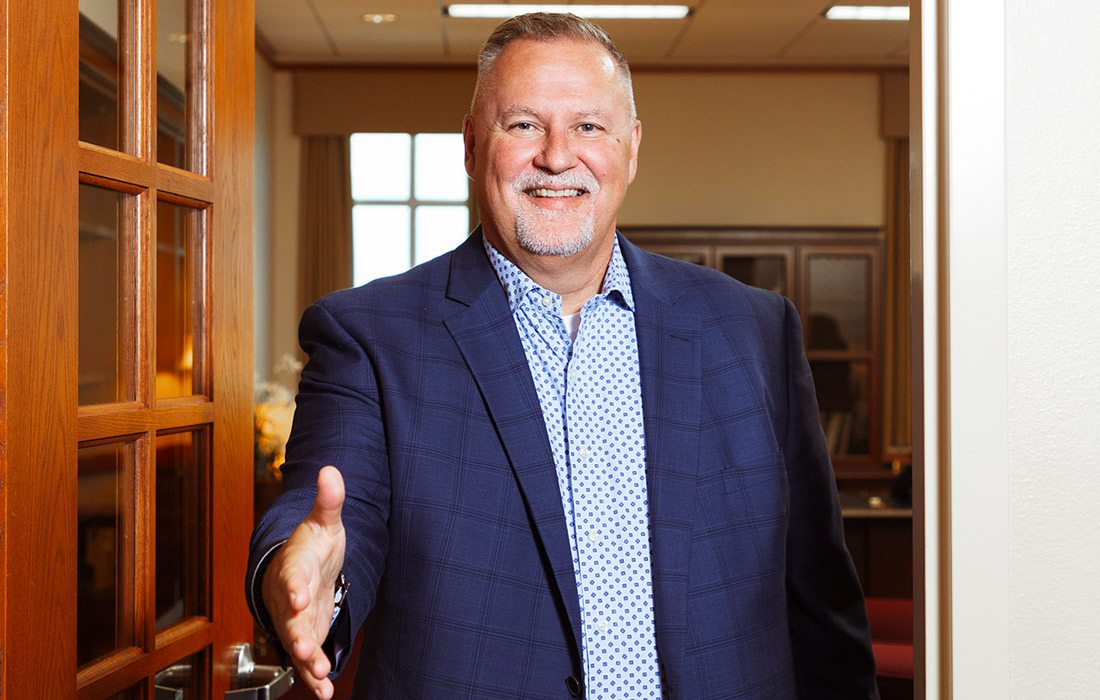 “I didn’t come to manage. I came to lead.” Dr. Mike Rakes, the recently named fifth president of Evangel University, may carry himself with purpose wrapped in homespun hospitality, but he’s always prepared. As we settled into his office to discuss his hopes for Evangel, conversation began effortlessly. We dipped in and out of hobbies, the process of his move here, how bare many of his shelves still were. Then, a casual comment about the recent news of Evangel’s new mascot, Valor, snapped him into focus.

“You know, if you Google ‘valorize,’ the verb form of the word, that’s even cooler,” he says. “Going back to the Latin, it means bringing you to a place of validation. This generation is validating compassion and innovation.”

Rakes has been working in higher education since 1995. A self-described learner at heart, he admits that he had no aspirations to work in the upper levels of the field. He was more interested in personal growth, learning and coaching. Doors continued to open for him along the way, and he eventually found himself in those upper levels, after all.

“As my wife, Darla, said, ‘What did you think you were doing?’” he says, laughing.

Regardless of his path to Evangel, Rakes is always ready to extol its virtues and to lead at this critical point. “Higher education was in a rut,” he says. “COVID has kind of pushed the barriers.” He recognizes that Evangel students “live in a poly-centered world. There’s very little that they have in common with one another aside from spaces. We have a diverse group, and that’s really pushed me to create new spaces for them,” he says. “Where they sleep, study and eat. That’s important.”

What did surprise him about Evangel was realizing how affordable the school was, as well as the quality of education offered. “The muscularity of our academic degrees is amazing,” he says.

While Rakes loves what he’s seeing at Evangel, he also has a vision for the future. His Seven Key Initiatives cover everything from collective listening to campus beautification. They include: the call to prayer, the collective listening process, the generosity through giving in chapel, the excellence and beautification project, engaging the EU Planning Council, the innovation and compassion initiative, and elevating the student experience.

He’s excited about the future, he says, because this generation gives him hope. “The optimism that is embedded within them to change things—they really do see that they need to change things, and I’m so proud of them for that,” he says. “They’ll be the first generation coming out of college having survived a pandemic. They’re hungry to be in community with one another, and it’s inspiring.”