Brian Ash’s new business, The Trolley Bike, launched in 2016 and brought roving entertainment to downtown Springfield. However, with an unusual business comes a daunting set of rules to navigate. Ash shares his tips for rolling through the regulations. 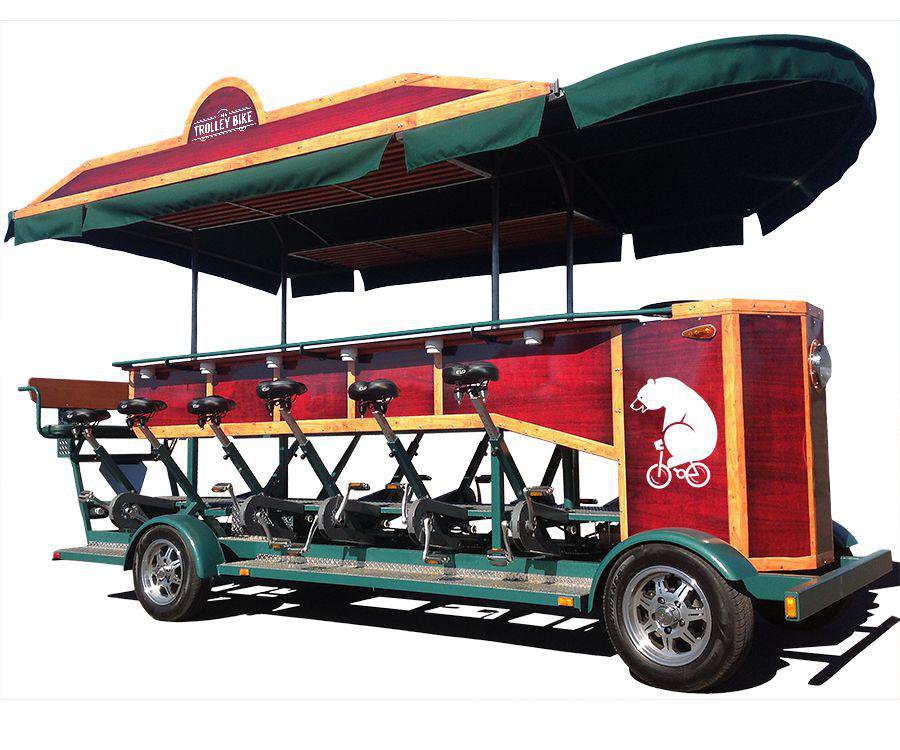 When Brian Ash saw a friend posting on Facebook about a trolley bike—a bar on four wheels powered by pedals—in Nashville, he knew he had to bring it to Springfield.

Before acting on his idea, Ash went to St. Louis to ride a trolley bike and to talk to the owner about how to get started. He suggested getting the city to approve the plans from the beginning, saying for this business, it’s better to ask for permission than to beg for forgiveness.

When Ash returned to Springfield, he had a plan. “First thing, especially after talking to that guy, was to make sure we could get the city to sign off on this, because we knew that it would be no small feat,” he says. With such an unconventional idea involving alcohol and a moving bike, Ash knew he had a maze of regulations ahead. Acting on the advice of yet another trolley bike owner, he found advocates in Jeff Seifried and Craig Fishel, both of whom were familiar with local government. Thanks to Ash’s experience as a city council member in Columbia, he also knew how to research and prepare for the city’s Plans and Policies Committee, who were the first to review his proposal.

The first unforeseen hurdle was clarifying to the Committee that a trolley bike is not a vehicle because it’s pedal-powered and does not need to be licensed or registered. He once again capitalized on the expertise of his network of fellow business owners—and had a helpful push from state Representative Lincoln Hough—to find a way to address the Committee’s safety concerns while still pushing the plans forward. For example, he learned that compromise is an integral part of the process when the Council wanted to require a commercial driver’s license for the trolley bike operators, a time-consuming requirement. He accepted the terms, which allowed the plans to move forward in the approval process, while simultaneously lobbying for the less restrictive chauffeur’s license instead.

To successfully pass the change, Ash took the time to meet with each council member individually to address specific questions and concerns. After Ash agreed to add seat belts, the Council agreed to his changes and passed the plans.

Despite the eight months Ash had to put into the preparation process, he says it’s been extremely satisfying to reach this point. His success thus far has given him a boost of confidence. “If we can get a city ordinance passed to allow us to drink beer on a bike here in the Bible Belt, I am confident that we can figure out how to make this business be successful,” Ash says.

Follow Brian Ash’s Advice to Cut Through the Red Tape:

The regulatory hoops a business like this faces are intimidating. The best option, Ash says, is to find someone on the inside who can guide you through the process. The next best option is finding what he calls a been-there-done-that guy to pass on his or her knowledge.

2. Do the heavy lifting

Ash prepared as much research for the Committee members as he could, so they would have fewer barriers to understanding and approving his business. He was even able to present sample ordinances trolley bike owners had used in other cities to operate legally.

3. Be prepared for people to say no when faced with a New Idea

“It’s human nature if something comes up, and you’re not really sure if it’s legal or if it’s not legal, the safest and easiest thing to do is come up with a reason to say no,” Ash says. He approached each no as an opportunity to further clarify and explain his vision.

4. Be willing to negotiate

“I understood that it was a give and take,” Ash says. To Ash, the chauffeur’s license requirements and seat belts were unnecessary for the business but reasonable from the Council’s standpoint concerning safety. Because both were easy changes to make and weren’t going to significantly impact his bottom line, he acquiesced.

Ash suggests calming initial doubts by reminding the Council members that their decision doesn’t have to be permanent. “That’s going to keep us honest,” he says. “We’re going to make sure that we’re good stewards and not causing any problems downtown because otherwise they won’t renew our business license.”

“Whenever I look at something that looks complicated in the beginning, it can initially seem a little overwhelming,” he says. “I like to take it and break it into digestible chunks, and I like to put things in priority order.” Creating a step-by-step lists helps you tackle the mountain of work more efficiently.