When Dr. Hal Higdon first arrived at Ozarks Technical Community College (OTC) in 2006, he identified one thing that had to be changed immediately: the logo.

“It was hideous,” he says. Higdon’s predecessor as OTC Chancellor, Dr. Norman Myers, told Higdon that because the school’s first catalog had been issued during the fall, the original logo was rendered in autumnal shades of orange and green. No one ever changed it, but apparently, no one liked it, either. Higdon proposed a new design in a color called “OTC Blue.”

Beyond this, Higdon says, the college was already well run and insists “there weren’t a lot of things that needed to be fixed, just things to be tweaked.” For example, he led a change to enrollment management—a strategic adjustment that helped the college weed out people who’d registered for classes without serious intent to attend. He also built goodwill on campus when he decreased the teaching loads of OTC faculty, who had been teaching more course hours than their peers at any of the other community colleges around the state.

But Higdon’s primary directive wasn’t change; it was growth. “OTC was undersized for this community,” he says. “It’s still underfunded. We have the lowest tax rate, locally, and the lowest level of funding by the state. The original board and president [had been] asked to build a community college on a shoestring.”

Now, it was Higdon’s job to ensure OTC leveled up. The Board of Trustees made it clear that he was expected to expand the college’s philanthropic support, tax base and financial support from the state. The board also wanted him to increase program offerings—a task that required even more funding.

It was a tall order. But as a longtime fan of the Alabama Crimson Tide, Higdon knows that the big games are won in inches, and he started figuring out how to put those inches together. He added staff to OTC’s philanthropy office and hired an outside organization to assess 417-land’s fundraising capability. The college amped up its community outreach, determined, Higdon says, to deepen relationships with “people of influence and affluence.” He networked in Jefferson City and with other higher education leaders to grow OTC’s funding from the state, something he says had to be “very slow and methodical.” These efforts yielded $50 million in fundraising during Higdon’s time as chancellor and ultimately resulted in a 33% increase in the funding OTC receives from the state. 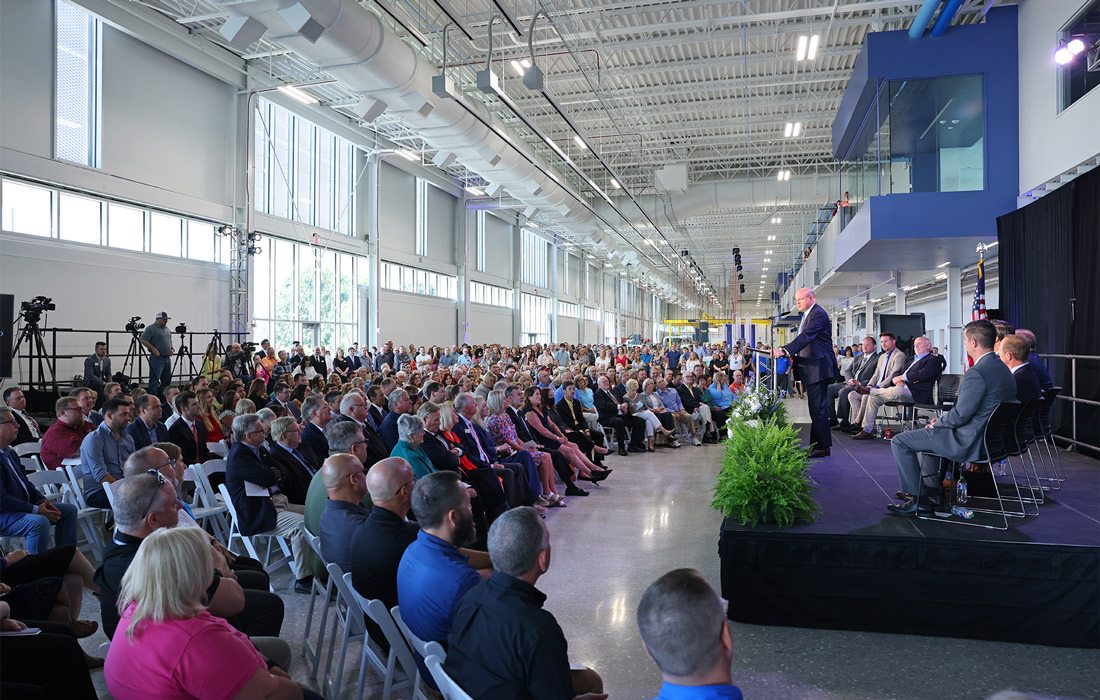 Photos by Kristina Bridges/OTCOn August 15, Higdon addressed the crowd that turned out to celebrate the opening of OTC’s Robert W. Plaster Center for Advanced Manufacturing. 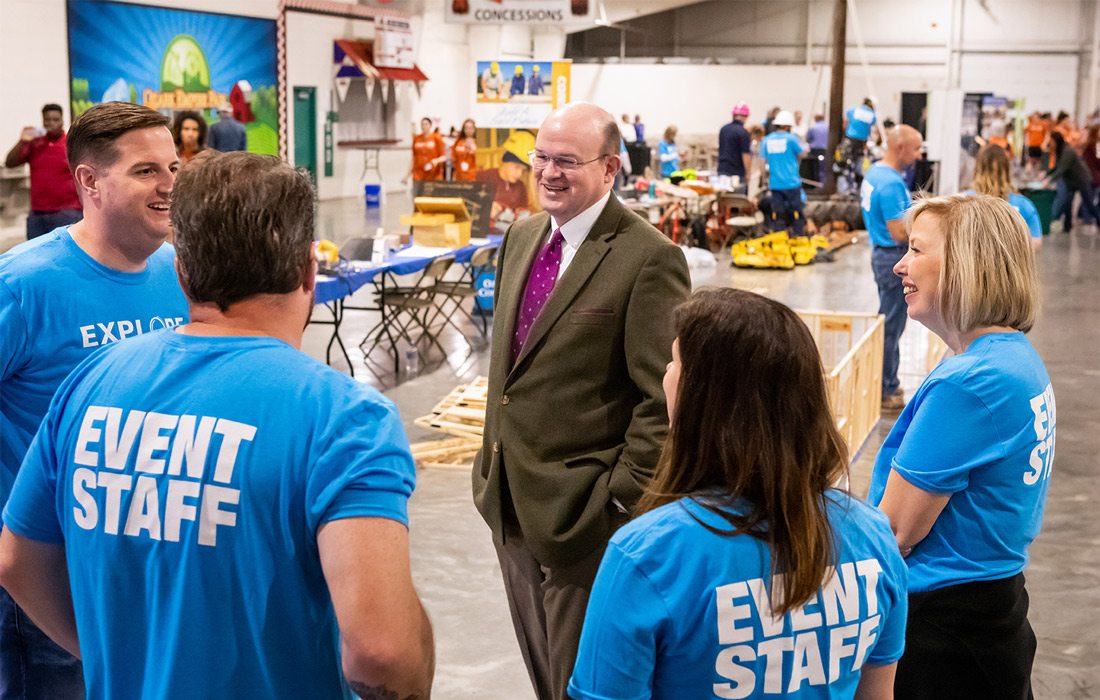 Photos by Kristina Bridges/OTCDr. Hal Higdon with OTC staff at the Technical Education Showcase in 2018 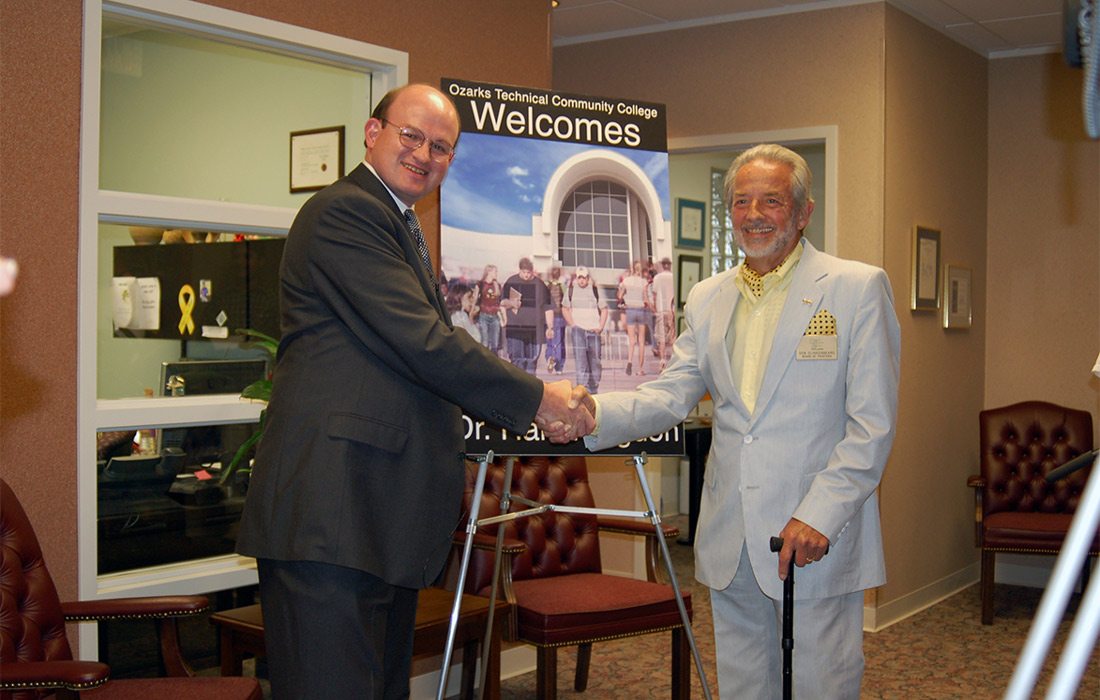 Photos by Kristina Bridges/OTCBack in 2006, then-Chair of OTC Board of Trustees Don Clinkenbeard welcomed Higdon to campus.

Higdon’s most significant challenge might have come on the local tax front. Approximately 15% of the college’s funding comes from OTC’s taxing district, which includes all of Greene County and parts of nearby counties. In some ways, this tax revenue is the financial manifestation of the community’s commitment to the college. OTC exists, Higdon says, to train the workforce 417-land needs, and 97% of OTC’s graduates remain in the area once they’ve finished school, presumably contributing to the local economy for years to come. The tax levy is the community’s way of putting some skin in the game. But taxes are hardly popular in southwest Missouri; tax increases are even less so. In 2018, OTC not only had to convince the public to renew an existing tax levy; it asked for a raise—an additional 5 cents in taxes per $100 of assessed property value.

“This area’s not anti-tax,” Higdon says. “It’s anti-lack-of-accountability. You have to be transparent and accountable.” And OTC had a reputation for fiscal accountability. For example, when voters approved a tax in 1998 to support technical education, OTC built the Industry and Transportation Technology Center, a facility that Higdon says “far exceeded expectations.” So when OTC’s future was on the ballot in 2018, he made the case that if taxpayers stepped up, OTC would come through again. The voters agreed. They renewed the existing levy and approved the 5-cent increase. That “nickel,” as Higdon calls it, was the inch OTC needed to make its next chapter possible.

With the extra tax revenue, OTC was able to build the Republic Education Center and move agricultural education to the Richwood Valley campus, where the program is thriving. Perhaps most significantly, the “nickel” generated $20 million for the Plaster Center for Advanced Manufacturing (PMC), a state-of-the-art facility that opened in August. The PMC’s remaining funding came from state appropriations and donations, including ones from the Robert W. Plaster Foundation, Larry and Donna Snyder, the Gentry family, American National, The Durham Company, Emerson, the Gene Haas Foundation, SRC Holdings Corp. and Rick’s Automotive. When the PMC opened in August of this year, 417-landers celebrated it as a game-changer for workforce development in our region.

Higdon made progress on the Board’s directive to add programs, too. “We listened to business and industry and asked, ‘What do you need?’” he says. “We’d say, ‘If you want us to do this, this is what it’s going to cost, and here’s how we can do it.’” This is how OTC added programs like pilot training in Springfield and line worker training in Lebanon.

Line worker training, in particular, serves as a vital pathway for students from rural counties where higher education isn’t widely available. In those classrooms, Higdon says, you’ll find a lot of square-toed boots, Wranglers and Skoal, along with plenty of John Deere and Bass Pro hats. You’ll also find ambition and the willingness to work hard. “They couldn’t do it if they weren’t willing to drive,” he says. “They’re coming in from Ava, from Cabool.” And when they graduate, they’ll be qualified for positions that pay $25 an hour.

It’s a transformative opportunity for people who live in places where good jobs are growing scarce. “If you took welfare and food stamps... and county services out of the county, there’d be nobody left in some of these counties,” Higdon says. This sounds blunt, but Higdon contends, “We can’t artificially keep people in urban areas where they can’t survive, and we shouldn’t artificially keep people in rural areas where they can’t survive.” To break that cycle, he says people need access to educational experiences beyond K–12. They need training and apprenticeship programs, and they might need a change of scenery.

Although Higdon speaks about the Ozarks with the depth and fluency of a native, he’d never heard of OTC until 2006, when a recruiter reached out and asked him to apply for the chancellor’s position. At the time, he was vice president of administration at Mississippi Gulf Coast Community College, and although the top job was appealing, he wasn’t looking to move. The recruiter convinced him, but still, he says, “Being in my early 40s, I didn’t think I had a shot. I thought it’d be a good learning experience.”

Of course, he got the job. He assumed he’d follow the typical trajectory for a first-time chief executive—stay for a few years before moving on. Five years turned into 10, and 10 turned into 15. “Now I’m in year 17,” he says.

He doesn’t plan on going anywhere. There are more programs to be developed, more opportunities to be mined, and there will always be more students dreaming of the future. And Higdon will keep looking for those inches everywhere. 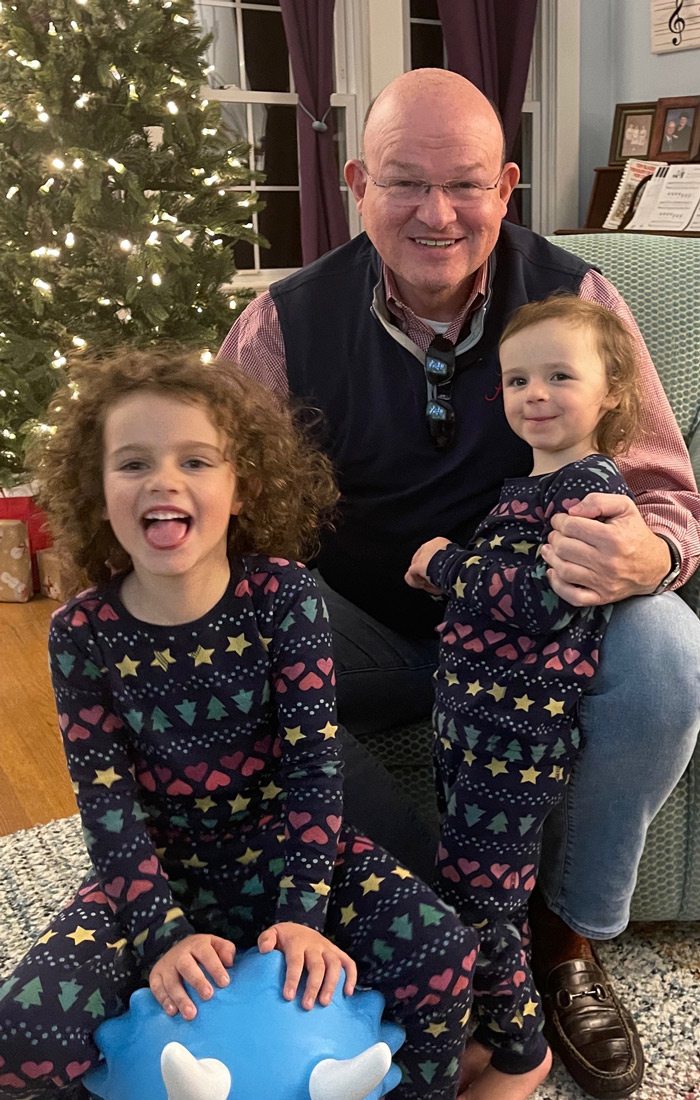 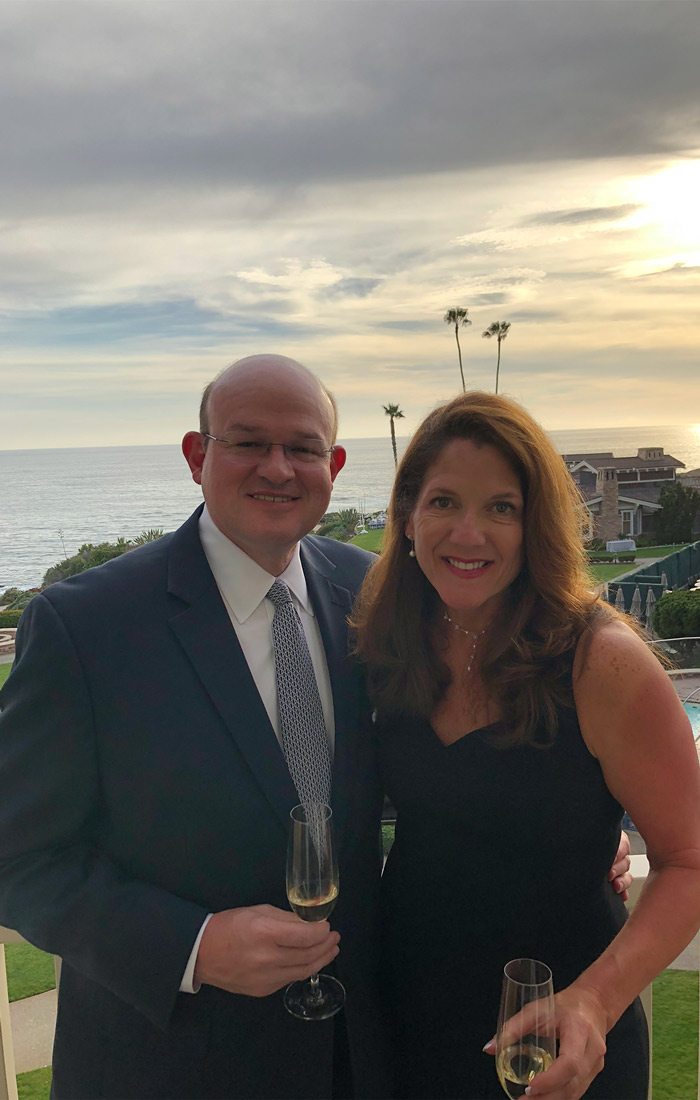 Off Campus with Dr. Hal Higdon

Higdon’s late wife, Nancy, was an accountant and educator from an “old Mobile family,” Higdon says. She was an Auburn fan, but the couple put their game day allegiances aside and married in 1994. Just nine months after Higdon took the chancellor’s position at OTC, Nancy was diagnosed with cancer. At the time, she was still living in Mississippi, fulfilling her duties as an instructor at Mississippi Gulf Coast Community College, and the separation was tough for both Higdons. Nancy came to Springfield for post-surgery treatment at CoxHealth. “Thank goodness that CoxHealth had [gynecological oncologist] Al Bonebrake,” Higdon says. “He was just fantastic. He’s one of a kind.” Nancy enjoyed a few years of remission before her cancer returned. “We were in town [together] from ‘06 to ‘16, and half that time she was in treatment for cancer,” Higdon says.

Last year marked the beginning of a new chapter for Higdon. During Christmas Eve dinner at The Capital Grille in Kansas City, he proposed to Molly Kerr, a banker from Leawood, Kansas. Kerr’s son Campbell and daughter Annie were part of the occasion, and 417-land was well represented, too—in the form of an engagement ring from Maxon Fine Jewelry. Higdon tells us, “Molly says I did a great job picking the ring out, and I say, ‘No, [Maxon co-owner] Jessica Harmison Olson did a great job picking it out.’”

Higdon has one daughter, Alexandria, from his first marriage. She lives in Hendersonville, North Carolina, with her husband, John, and three children: Hala Ann (5), Julip (3) and new baby Elby.