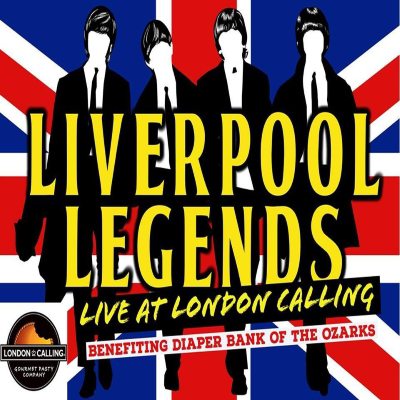 London Calling co-owner Neil Gomme said: “We are encouraging everyone to come down and enjoy a rare Springfield performance from Branson’s internationally recognized tribute band.”

These fab four are celebrating their 12th season headlining their own production in Branson, Missouri. The Liverpool Legends have been awarded Best New Show, Best Band, Best Show, Best Tribute Show and have received the prestigious Visitors’ Choice Award for Entertainer of the Year.

The Liverpool Legends will be available before and after the concert to sign autographs, serve pasties and pose for photos.

According to Gomme, the event will be free to the community, but diaper donations will be collected to benefit local charity Diaper Bank of the Ozarks.

“We will be placing as many unopened packages of diapers as we can to fill up the yellow submarine VW Beatle that will be parked next to London Calling in the run up to the event,” said Gomme.

Diaper Bank of the Ozarks (diaperbankoftheozarks.org) was established to keep our babies healthy and happy by providing access to diapers for families in need.